While some people Google such important questions as “Why do men have nipples?” or “Do pigs sweat?” those engaged in professional activities often have something more serious on their minds: searching Google for appropriate software.

We found a great way to judge interest in this or that software through a means that might not seem obvious: the change in frequency of Google queries. We decided to look more closely at what could be learned from examining changes in frequency.

Once you’ve read our case study material, you will be familiar with queries that most interest bottom-of-the-funnel future clients. As a software developer you’ll be able to make an educated guess as to which niche would be most effective to pursue.

We have selected a little over 500 software categories and studied the demand for them (based on Google searches) over the course of three years (2015 to 2017).

Here are the interesting findings we managed to come up with.

Finding #1: Some Software Surprised Us By Showing Popularity Growth

We had a lot of fun analyzing data for this case study. I have three words for you: Jail Management Software.

It is always interesting to watch some documentary on prison life on National Geographic, or listen to a recording of Johnny Cash’s “Folsom Prison Blues.” So this “jail management software” attracted our attention. 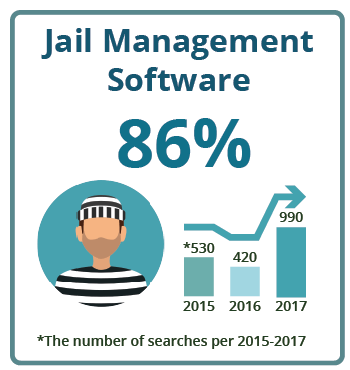 Turns out, this is a popular search that grew by 86% over the years we looked at, and almost reached a thousand yearly requests.

Sounds like fun, but this is actually complex software that allows for managing jail operations and offender movements and automates certain functions.

It appears that overcrowded and understaffed U.S. prisons are struggling with optimizing operations to deal with certain factors, such as overcapacity or inmate entitlements within a prison.

Doesn’t seem like a great idea to get too deep into developing software for correctional institutions. They are heavily under-budgeted, and the latest reforms didn’t do a great job towards progress in this direction.

The biggest earners in software that involves managing prisons build virtual jails. British video games developer Introversion Software created “Prison Architect,” a game that grossed over $19 million in sales before the studio sold the rights to it. 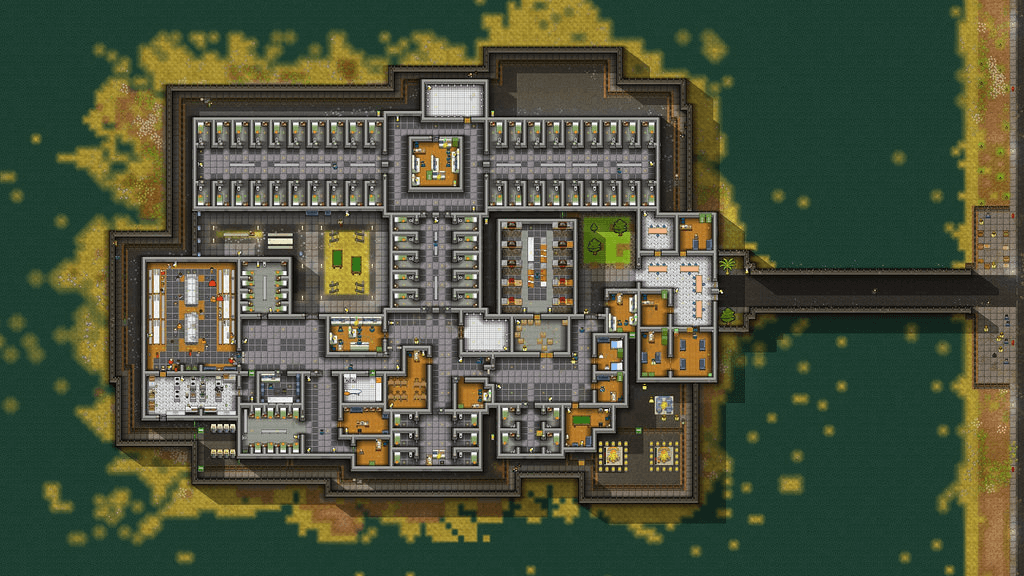 So here, despite the overall increase in interest, we’d advise software developers to look elsewhere for an industry niche.

Apparently, people are interested in hiring others to work for them and in assessing offered jobs as clearly as possible.

Almost all kinds of software for assessing personnel drew more frequent search requests in 2017 in comparison with 2015. 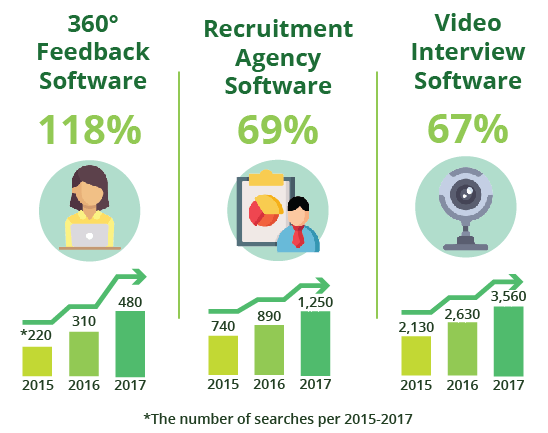 The queries showed a steady year-to-year growth with a strong inclination towards professional HR software rather than old-school hiring tricks.

As Forbes contributor Brian Rashid noticed about HR procedures, “What was once limited to stacks of paper and dusty old filing cabinets has now been streamlined on the Internet.”

They see this growth in the popularity of HR software as the result of special features it offers along with basic functions and its relatively low cost. Performance analysis is important for business owners, and software allows for easy assessment of a company’s turnover, compensation costs, and staffing allocations.

No wonder companies want a software to help with such important matters.

As to the numbers, queries for 360-degree feedback software showed growth of 118%, from an initial 220 monthly searches.

Here are some other Google search queries that had an overall increase in popularity of more than 50 percent over the course of the three years selected for analysis.

HR software distribution doesn’t seem like an idea that’s a complete bust if you’re hesitating about whether it’s relevant in today’s world.

The facilities that help shape your body and relax your mind are finally getting their processes in order.

Or so it seems, as queries for software that would help receptionists, trainers and visitors at yoga, fitness, Pilates and spa centers have become more frequent. 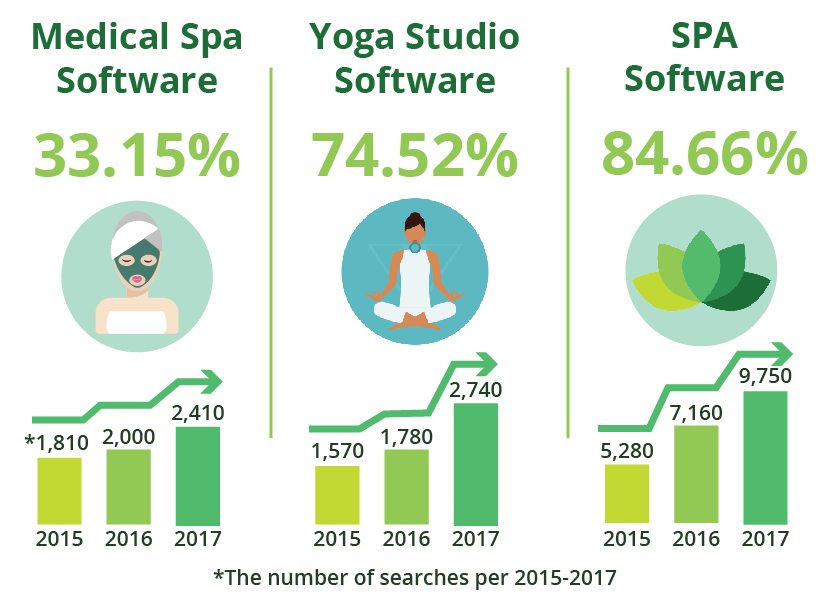 This main aim of the software is to simplify booking and cancellation processes for classes and fitness sessions, to avoid schedule misunderstandings. Automation is just what these industries need.

Wouldn’t it be nice to receive notifications about your appointments? Sure!

Wouldn’t it be nice to have all the appointments in a single app for the fitness trainer? Most definitely! As competition in the health and fitness industry is huge, automation is something that can help businesses stand out.

Here are the health and fitness industries where the demand is growing:

After figuring out which industries people tend to google more when seeking software, we decided to examine how interest in software correlates to the popular discussion topics we hear a lot about.

We decided to take a look at artificial and augmented realities software. The hype seems to be around these topics in recent years. We also couldn’t help but take a look at search queries on those seemingly highly discussed topics. 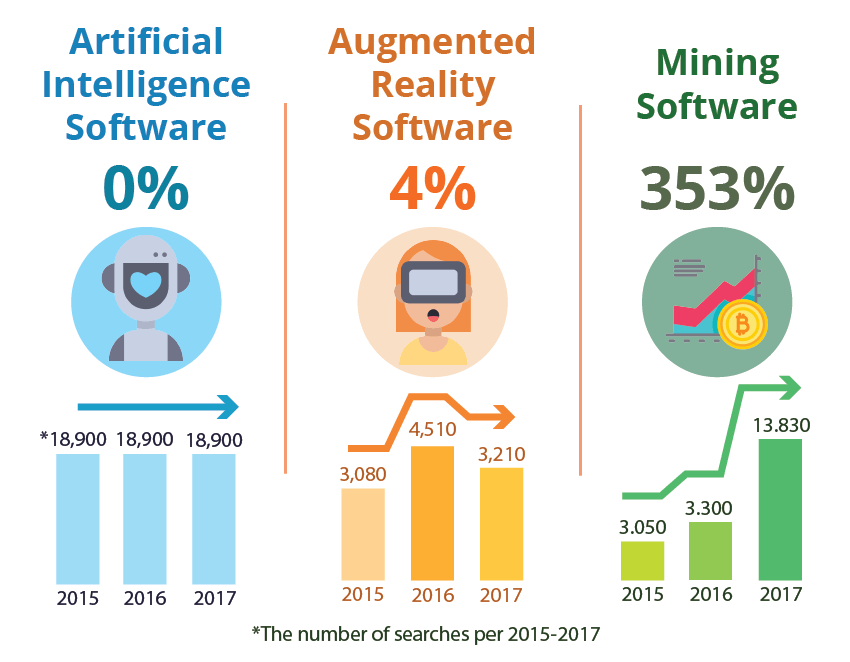 “[Hyped topic] + software” queries in Google usually signal commercial intent. Just because a topic is trending doesn’t necessarily mean you should dive head first into participating in something connected with it.

As we can see, people like to talk about artificial intelligence. One would guess the hype on it would increase due to the new Blade Runner movie starring Ryan Gosling and Harrison Ford.

Not in business queries. While the volume of Google search is quite high, there is no shift in it over the course of these three years: queries on the topic stayed more or less the same for 2015, 2016 and 2017.

While that global phenomenon is almost forgotten now, there was still a 4% increase in searches for augmented reality software in 2017.

Mining software unsurprisingly saw a more than quadruple increase in Google search as cryptocurrencies turned out to be a hot topic for discussion (just remember miles-long threads on Reddit, for instance).

The growth in marketing automation requests over the course of the past three years makes us wonder if people even knew about such software back in 2015. 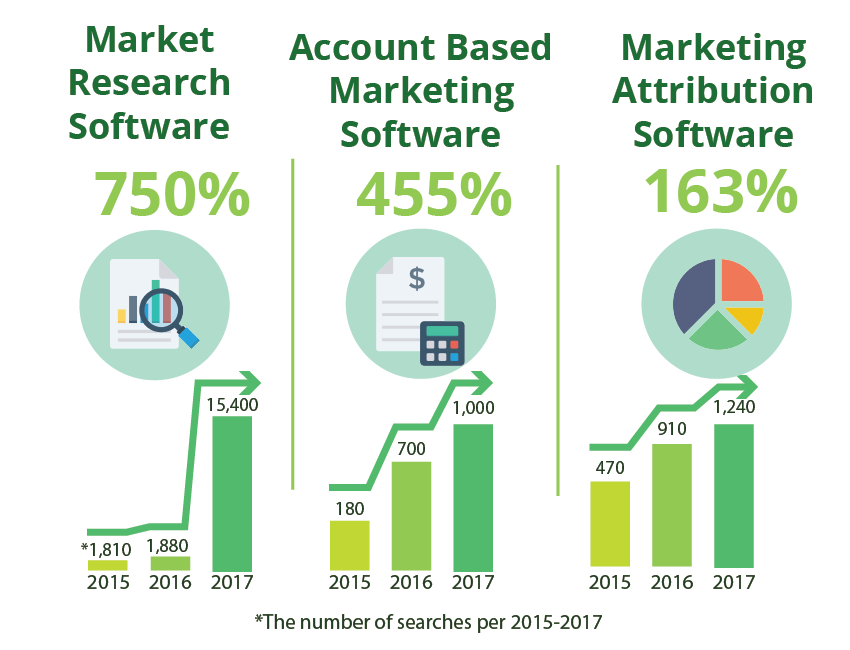 Market research software seems the most promising among all the possible options: 15,400 queries against 1,000 queries on “account based marketing software.”

However, account-based marketing software also shows a tremendous relative growth. Looks like a promising niche with low competition within it. Make a note, software startup founders!

In theory, business plans help organizations in identifying their mission, creating better management systems for the organization, and developing presentations to ensure operations are funded.

It looks like demand for business plan software has declined. This software

“provides the framework to run your business more efficiently and profitably”

(claims Business Sorter), yet it has shown a 34% decrease in queries over the course of two years, down to mere 23,200 yearly Google requests. 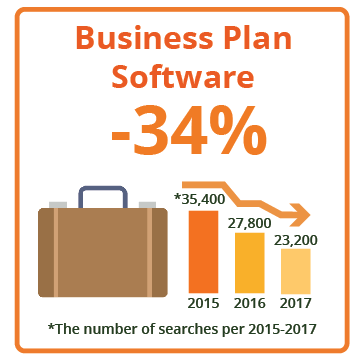 This is not an industry with growing interest.

Besides, there are plenty of excellent products already being offered in this niche. High competition in a low-demand industry? No, thank you.

Finding #7. Many Industries Seem To Be Already Covered

Some industries are more than covered. 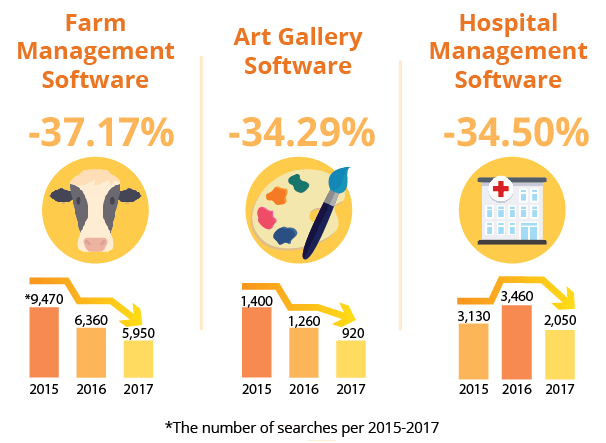 Are there many art galleries in your neighborhood? I’ll bet there are far fewer of those than fitness centers. We believe the decrease in interest for art gallery software is closely tied to the fact there are not many of them.

Those that are there have probably made decisions about software that can help them with inventory, client management and other things art gallery software covers.

We believe the situation is more or less similar with hospital management software. Once again, those who were interested in getting it have ordered from the products already on the market.

As for farm management software, it is hard to say why the fall in Google searches was as large as it was (-37.17%). Perhaps it’s linked with a slight decrease in the number of farms and their total territory.

Anyway, this is not the kind of software I’d suggest developing, as the niche seems to have been filled already.

A Little More On Growth: The Biggest Winners by Number and Percentage

To sum up, we decided to count the absolute and percentile relations between Google searches in 2015 and 2017. To begin with, here’s a graph showing the growth in searches. 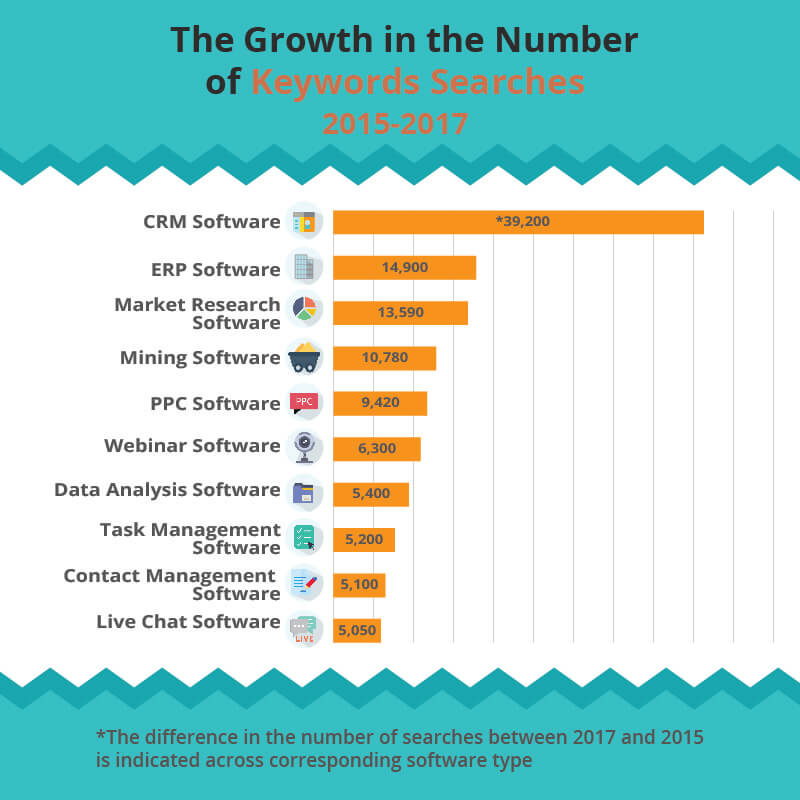 CRM and ERP software showed the biggest increase in the number of searches. Despite such huge growth, those are niches that have lots of software being produced, so the competition between solution providers is going to be tough there.

The only other software that received 10,000 more Google searches compared to 2015 is mining software. In this case, hype around mining explains a lot.

Now let’s have a look at percentage growth in Google searches in different niches. 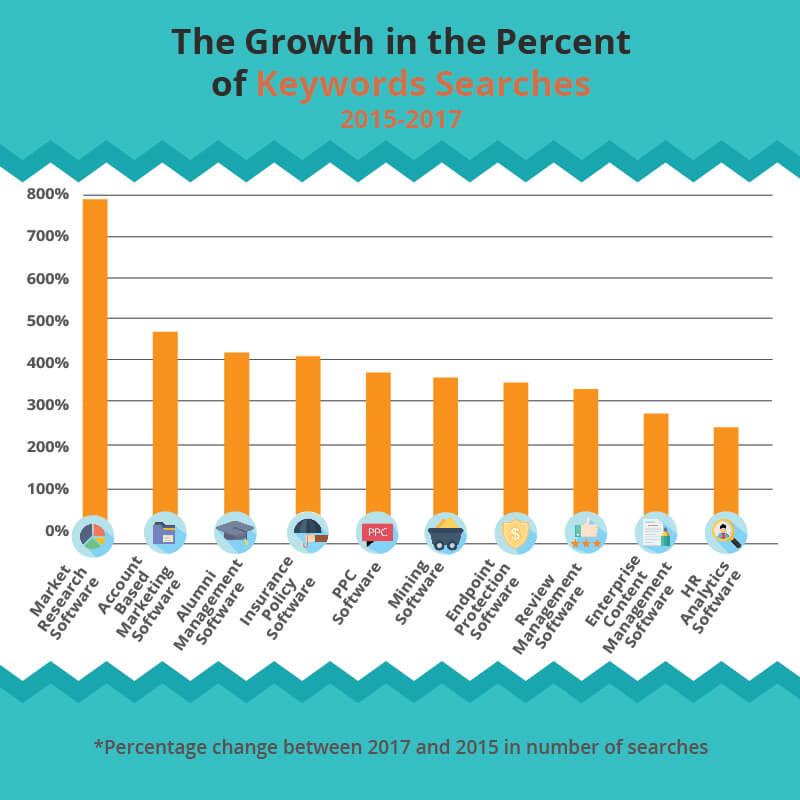 There’s an interesting guest here: alumni management software. We wondered: what is it, and how it is able to get 400% growth?

Market research software is the fastest growing area of software sought through a Google search over the past three years.

That’s it with growth. Let’s turn to the searches that became less popular over the course of these years.

The Biggest Losers, by Number and Percentage 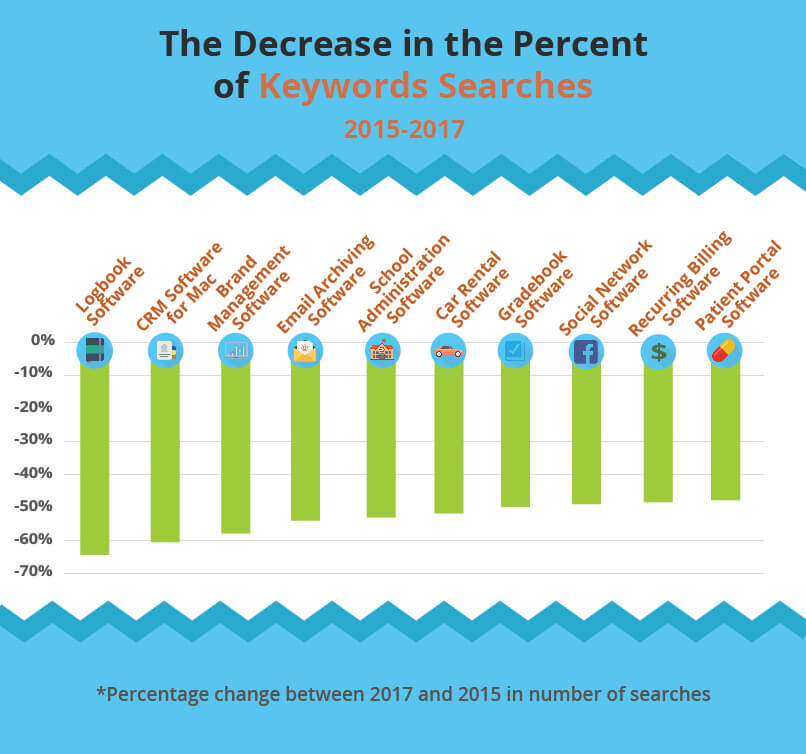 The graph speaks for itself. Nobody was rushing to develop school administration software, for example.

Now it seems even less attractive, as interest has dropped by more than 50%. 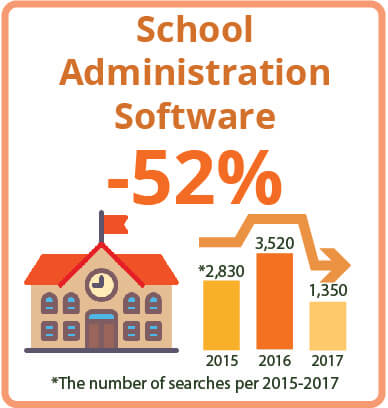 Now let’s have a look at the graph with biggest drop in an absolute number of searches. 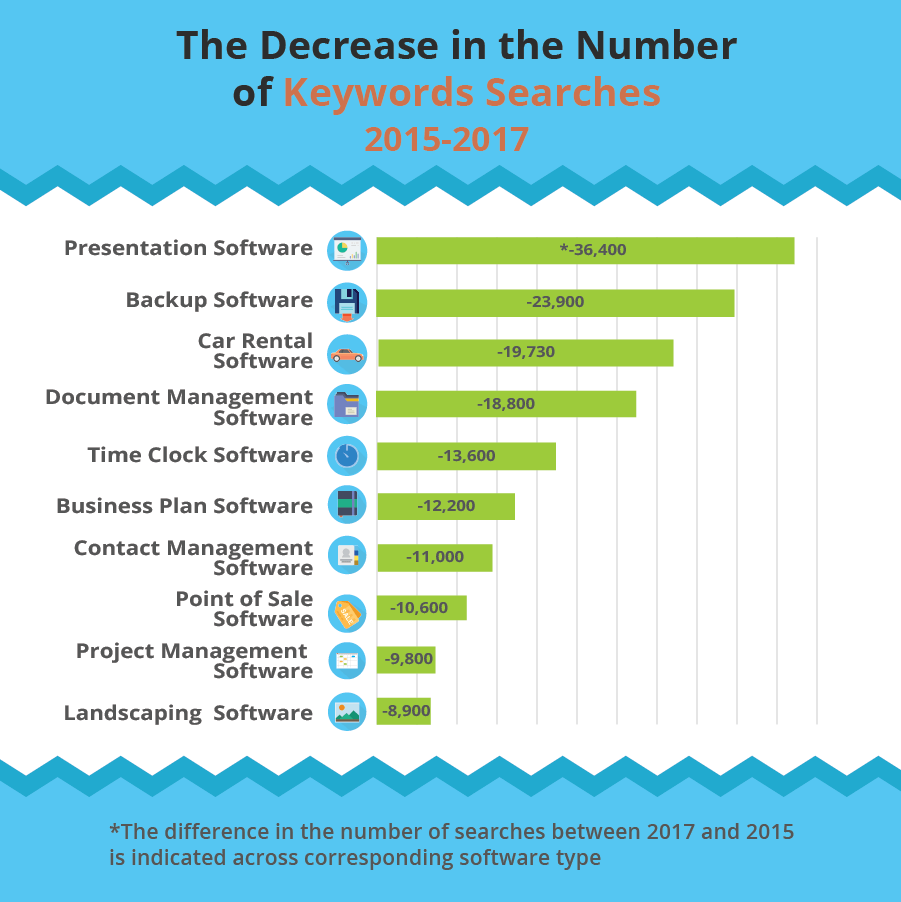 Three years might be a short period in human history, but it can make a huge difference in the marketing and software development world.

Demand for certain types of software changes all the time; we simply decided to study the difference between 2015 and 2017.

We hope that results of our findings would help some software startup avoid getting involved in developing a product for a niche with almost no demand, and rather help it develop a product that will be relevant to current market needs.

Which of the findings do you find the most useful, or at least entertaining?

Our case study is backed up by the data we’ve extracted from Capterra.

We captured data on no less than 550 software categories using Capterra, a web service that helps businesses in their search for the right software and categorizes the software users search for.

After we extracted these software categories, we used AdWords to get the number of searches for each category on a monthly basis for the past three years.

After that, we compared changes in the number of search queries that, as we believe, indicate a change in level of interest for each software type from potential buyers. Increasing interest might mean potential growth for the industry.

Pay attention to the fact that this methodology doesn’t reflect the actual market size of software types. It is only good for demonstrating the demand level from bottom-of-the-funnel users.

How Can Kraftblick Help Your Software Company?