Perfect Editing is King: The Process of Editing Articles at Kraftblick

“To write is human, to edit is divine.”

Everybody likes to write, but nobody likes to correct all that writing. I guess this is how I interpret Stephen King’s quote. 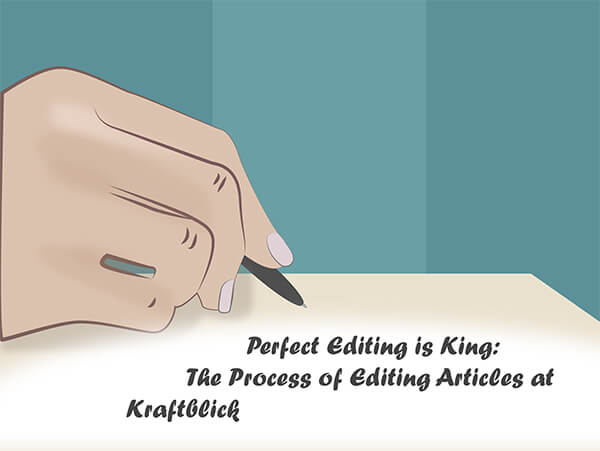 Michael Lynch, a software engineer at Google, made quite a fuss online after he quit his job and started to work independently. His blog has a post about how a hired editor helped increase his blog audience 450x.

There is not much creativity in editing work compared to creating original text. Most writers find editing routine and uninteresting.

At the same time, one must have a lot of skill and tact to correct other people’s text without hurting their feelings.

On average, here at Kraftblick, writing an article takes 30 working hours among those involved in the process (an expert, writer and editor). The most time-consuming process is writing, the next most is outline creation, and after that, corrections.

Self-checking is included in the process of writing.

In this article, we are going to describe the editing process of outlines and full articles. We will also speculate on the importance of having an editor for creating top-notch content.

How Can Kraftblick Help Your Software Company?

We think it would be entertaining to describe our biggest quarrels and disagreements between writers and editors about the course of content creation. Spoilers: this is nothing like wrestling—everything’s feisty, but nice and polite!

The funny part here is that the editor will have to work on this article as well. Well, let’s go, let’s give her some extra work…

“Well, to make a long story short, I can’t write, which kinda sucks, since I’m supposed to be a writer. And a professional one at that.”

I am a huge fan of cable TV, and Californication used to be one of my favorite shows when it aired on Showtime. Not the sex part—although that was entertaining as well— but rather the witty-yet-sad, self-critical remarks by the main protagonist, Hank, depicted by David Duchovny.

Sometimes, as a blog author, you have to just work on yet another blog post even though all you want to do is to drive a Porsche, drink scotch, and fornicate with a beautiful insignificant other.

The task of an editor is to get this dreamer back to earth and remind him about deadlines that won’t meet themselves, unless someone starts to write. All the excuses like “no inspiration” and “writing sucks” don’t count here.

Neil Patel provided us with some great insights about creating cool pieces even when your writing skills are mediocre at best.

The thing is that most tasks in the process of writing an article are rather mechanical. A lot of googling for cool references, stats and quotes is necessary for making an outline of a blog post for a marketing company.

When a rough outline is ready, even after a couple of rounds of self-checking, many factual, logical, and sometimes grammatical and spelling mistakes are left in the outline.

The task of an editor is to point them out to the author. Usually this is done with the help of comments in Google Docs. It is then up to the writer to decide if he or she wants to implement the corrections offered by the editor; the only rule is not to ignore these comments altogether.

One of my most common mistakes in outlines is creating headings that don’t correspond with the context of the text that follows. And all the headings within the body of our articles have to be similar in structure.

Sometimes the contents within the article change from what was initially planned, but I keep forgetting to change the headings! I would definitely get my readers confused if this had not been noticed.

As for spelling, I am not a huge fan of British culture in general, but the word “favourite” is one I can’t resist. It doesn’t go well with the American English we use for our blog posts.

Usually outline corrections take no longer than a couple of hours of an editor’s time and an hour of the writer’s time after that.

Read more:  How to Create a Market Penetration Strategy and Make the Market Play by Your Rules

After editing the outline and writing the text according to that outline, the process of self-checking begins.

Before sending the work to the editor, plenty of checks have to be completed. In fact, there is a special checklist for self-editing that one has to complete.

Quetext is the software we use to avoid plagiarism. The text has to be at least 95% unique. As copywriters, we do plenty of quoting when describing popular topics, so getting 100% is nearly impossible.

We use software called Grammarly for grammar checking, and the text has to be graded at least 90 and not contain critical grammar mistakes.

Hemingway Editor is another app we use to check text to ensure that it is easy to read. Grade 6 is the target, but the overall highest grade is 8 (the lower the grade, the easier the text is to read).

After checking these points off the list, the text goes to the editor. She checks the logic and how the topics and headings of articles correspond to their insides. The logical flow of the story must be smooth without jumps or omitted facts.

Every fact that is linked to other blog posts, internal or external, has to be checked by the editor. Every quote has to really belong to the person to whom it is attributed. If there are any doubts about the factual information, or there are no links that lead to it, the editor has to ask the author to provide proof.

Editing the body of an article usually takes three or four hours, but sometimes additional rounds are needed after all the corrections are made.

Many of our articles are checked by experts. Some factual mistakes can be found in the text that were missed by both the writer and editor if they lack precise expertise in certain issues.

This is especially true for “how to” articles, like this one, when the copywriter is not an expert in AdWords and some nuances can be corrected only by a PPC specialist who knows well how negative keywords work from A to Z.

Read more:  How to Create a Digital Marketing Strategy for a SaaS Company to Get Leads, Not Pain – Part 3

Now let’s have a look at potentially the most scandalous part of the blog post.

The Biggest Fights and Quarrels Between Our Writers and Editors

Sometimes when the things aren’t going too smoothly with the material I am working on, and the editor gives tons of corrections to work on, I start to wonder if she is being too strict.

Usually this is nonsense, and I end up persuading myself that some parts of the article needed to be severely changed or rewritten.

Things usually also get testy when the author fails to meet a deadline. Constant reminders of the due date don’t boost productivity and you can get a little angry at the world.

One way to get the editor irritated is to forget about page numbering in Google Docs. I remember it only when I see the editor opening my new doc and whispering, “again!?” 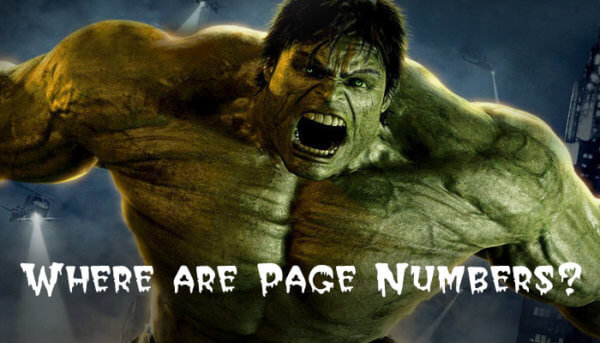 In general, our editor is strict, but also very reasonable, so conflicts are very rare. Perhaps we are too busy to argue aggressively.

However, it might be the case that the skill of suggesting corrections in a way that doesn’t hurt the author is an important skill that not every editor has.

Remember Michael Lynch, the software engineer at Google who hired an editor who helped him increase his blog audience 450x?

We don’t believe that repeating Michael Lynch’s experience is possible for every blog.

What we do believe is that external feedback is important and helpful. We also believe that the process is the key to our content strategy, and editor actions are extremely important as a part of this process.

Do you find the editor’s job fascinating, or would you rather write?

Done with reading? Now you may want to check this: